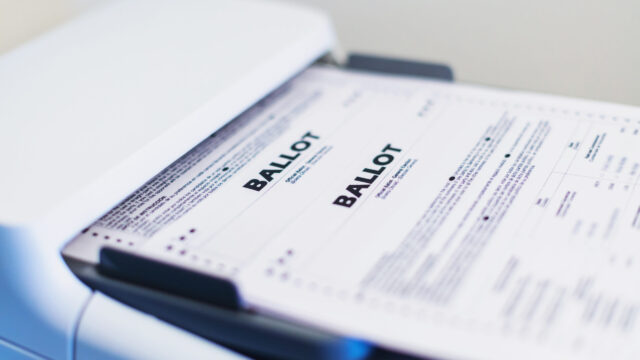 Through a Freedom of Information Act request to the Department of Homeland Security, EPIC obtained records circulated in a 2018 election security meeting with members of the U.S. House of Representatives. On May 22, 2018, then-DHS Secretary Kirstjen Nielsen, then-Federal Bureau of Investigation Director Christopher Wray, and then-Director of National Intelligence Dan Coats held a classified briefing for members of Congress informing them of the risks to the election process and steps the administration was taking to assist state officials in ensuring election security. The briefing materials include charts on election infrastructure cyber risk scenarios and cybersecurity considerations, as well as compiled anecdotes of the DHS’s engagement with state election security officials. These anecdotes highlighted how states have taken efforts to strengthen their election systems for the 2018 mid-term elections, including some states taking up the voluntary election security resources from DHS. EPIC sued the DHS for records about the agency’s assessment of election vulnerabilities following the 2016 presidential election and its ongoing role in protecting election systems as critical infrastructure. The agency released hundreds of pages of records to EPIC about its role in election cybersecurity, with records revealing the agency’s rocky initial involvement in election security following its 2017 designation of election infrastructure as critical infrastructure and how far the agency has come since then. The case is EPIC v. DHS, 17-2047 (D.D.C.).