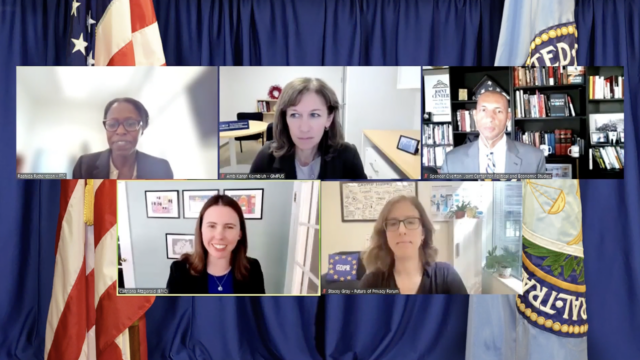 EPIC Deputy Director Caitriona Fitzgerald warned that the U.S. is “facing a data privacy crisis” and urged the Federal Trade Commission to adopt a data minimization rule at this week’s FTC public forum on commercial surveillance (video here). The event was part of the FTC’s recently announced rulemaking on commercial surveillance and data security.

“The best way the FTC can rein in commercial surveillance under current law is to use the Commission’s section 5 authority to issue an unfairness rule that limits wide scale tracking and profiling of consumers,” EPIC’s Fitzgerald said, speaking on a panel of privacy and civil rights advocates. “Data should only be collected, used, and transferred as reasonably necessary to provide the service requested by the individual. That is what people expect when they use the Internet.”

Later in the event, EPIC Director of Litigation John Davisson underscored that today’s commercial surveillance practices are exactly the type of threat to the public that Congress intended the FTC to address through rulemaking. Calli Schroeder, EPIC Global Privacy Council and U.S. Co-Chair of the Transatlantic Consumer Dialogue, emphasized the importance of pairing the FTC’s forthcoming rules with robust enforcement.

EPIC has long called on the FTC to exercise its rulemaking authority to saefguard privacy and civil rights. A recent EPIC white paper urged the Commission to establish a data minimization rule using its section 5 unfairness authority. In 2020, EPIC petitioned the FTC to conduct a rulemaking on commercial uses of AI and personal data. EPIC has also joined numerous coalition letters to the Commission calling for a privacy and civil rights rulemaking.