Data collection is at the core of most online platforms’ business models. For this reason, mergers and acquisitions in the Internet industry pose acute risks to consumer privacy.

Consumer groups have called attention to the link between privacy and competition for over two decades. In 1999, EPIC first pointed to the specific consumer privacy risks that would result from the Internet advertising firm DoubleClick’s proposed acquisition of the catalog database firm Abacus. EPIC, the Center for Digital Democracy, and US PIRG warned the FTC of the devastating consequences for consumer privacy that would result from Google’s acquisition of DoubleClick in 2007 and of Facebook’s acquisition of WhatsApp in 2014. The Federal Trade Commission’s failure to block these mergers or impose privacy safeguards has drastically reduced privacy for Internet users around the world, stifled innovation, and accelerated industry consolidation.

Why Concentration of Tech Firms is a Problem

A handful of technology companies now assert unprecedented control over the digital economy. Google and Facebook achieved their dominance through unrivaled access to consumer data. While these two companies may be known for offering search and social media services to Internet users, their real customers are advertisers, and the products they offer are the users. Over 80 percent of Google’s revenue comes from advertising, while advertising accounts for nearly all of Facebook’srevenue.

The more dominant these companies become, in turn, the greater their ability to collect consumer data and increase their share of the market.

This dominance is not simply a result of “network effects”––the phenomenon whereby each additional user of a network enhances the network’s value. Privacy—or a lack thereof––is at the very heart of why the digital platforms have been able to entrench their dominance. Access to consumer data gives firms a competitive edge that did not exist prior to the age of big data. The more dominant a company becomes, the greater its ability to surveil consumer activities and grow its database of personal information that advertisers can use to target consumers to sizes that potential competitors cannot compete with. It also enables the company to extract more advanced information from its artificial intelligence techniques, making its behavioral advertising models infinitely more valuable than a rival firm’s models.

What is the Solution to Ensure Better Competition in Tech?

The Federal Trade Commission has broad authority to consider privacy harms in its competition enforcement. Section 7 of the Clayton Act, 15 U.S.C. § 18, prohibits mergers if “in any line of commerce or in any activity affecting commerce in any section of the country, the effect of such acquisition may be substantially to lessen competition, or to tend to create a monopoly.” As the FTC states in the agency’s horizontal merger guidelines, “a merger enhances market power if it is likely to encourage one or more firms to raise price, reduce output, diminish innovation, or otherwise harm customers as a result of diminished competitive constraints or incentives.” Section 5(a) of the FTC Act, 15 U.S.C. § 45(a), prohibits, inter alia, “unfair methods of competition.” Unfair methods of competition include any conduct that would violate the Sherman Antitrust Act.

Commissioner Pamela Jones Harbour explained in her Google-DoubleClick dissent why privacy falls squarely within the ambit of the Commission’s competition authority. “Section 7 is inherently forward-looking,” she wrote. “It requires the Commission to apply a dynamic analytical approach, based on predictions about how markets will evolve.” As she explained:

Google and DoubleClick’s customers are web-based publishers and advertisers who will profit from better-targeted advertising. From the perspective of these customers, the more data the combined firm is able to gather and mine, the better… [u]nder the majority’s application of Section 7, there is no adequate proxy for the consumers whose privacy is at stake, because consumers have no business relationship with Google or DoubleClick.

The dominance of a few firms in the online advertising marketplace, which has led to the widespread use of data collection and behavioral advertising systems, is a case study in the damaging spillover effects that a lack of competition can have on privacy in the Internet ecosystem. The United States stands virtually alone in its unwillingness to address privacy as an increasingly important dimension of competition in the digital marketplace. The merger of Facebook and WhatsApp has prompted countries in Europe to scrutinize the deal and issue fines. But the FTC has repeatedly failed to consider consumer privacy and data security issues in its merger review process. If the largest Internet firms continue to buy up new market entrants and assimilate their users’ data into the existing platforms then there will be no meaningful opportunity for firms to compete with better privacy and data security practices.

EPIC has underscored the dangers posed by lax enforcement in comments to the FTC, noting that Google and Facebook’s access to consumer data “is at the very heart of why the digital platforms have been able to entrench their dominance.” But as Facebook and Google have developed increasingly invasive tracking of their users, the FTC has failed to act. Despite an active consent decree against Facebook, the FTC allowed the company to disclose the personal information of 87 million Americans. The FTC had the power to stop the scandal, simply by enforcing its previous orders in a way that protected consumer privacy. It didn’t.

For more than a decade, EPIC has shown the FTC in numerous antitrust and privacy complaints that each acquisition by a dominant firm has led to a reduction in both competition and privacy protection.This is willful ignorance on the part of the agency tasked with protecting American consumers and competition. The Federal Trade Commission’s disregard for privacy protection and lax record of antitrust enforcement are diminishing innovation and competition in the United States economy.

It has become increasingly clear that data protection, competition, and innovation are all essential to a healthy Internet economy. The consolidated market power of online platforms today is not healthy. A handful of companies dominate the market. The privacy of Internet users is under assault. The revenue model that allowed small businesses to break into the market is broken, and the current model is not sustainable. Antitrust enforcers must treat consumer privacy as the competitive harm it so clearly is. 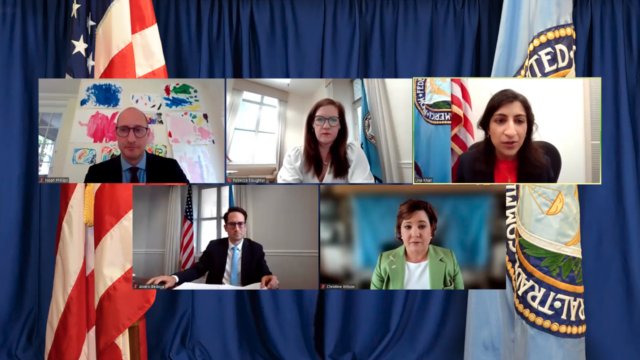